The CSA B51 CRN format is an initial letter followed by 3 to 5 digits, a decimal point and the next digit which specifies the province of first registration. Additional digits indicate other provinces that have also accepted the design. 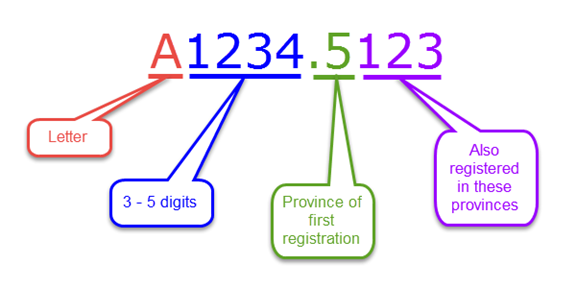 Actual CRN numbers can deviate from this format, but usually not widely.  Here are some real numbers illustrating common variations:

A map of Canada showing the digits/numbers for the different provinces: 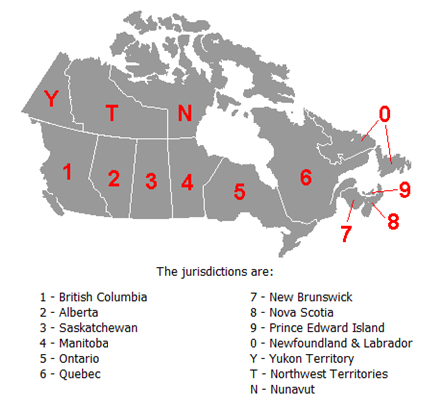 The starting letter is not always unique to a province. The fictitious CRNs A1234.23 and A1234.32 are two different vessels, the first registered in Alberta, and then in Saskatchewan. The second, a different vessel, is first registered in Saskatchewan, and then Alberta. The CRN number cannot be guaranteed to be unique until the first province of registration as indicated by the first digit after the decimal point is included.

Multiple CRNs on One Vessel

One of our first large registration jobs was for a line of standard vessels registered Canada wide. Our customer had been applying for CRNs across Canada as required without referencing previous registrations for the same vessels elsewhere in Canada.  Each vessel ended up with many different CRN numbers, added as they were sold into new provinces.  The CRN for the province being sold into was being stamped into the nameplate before shipping.  This worked only as long as the ultimate province of use was known at the time of production and the vessel was not re-sold.  Problems arose as the vessels were sold to one province, put on skids and shipped to another – additional CRN numbers had to be stamped onto the nameplates in the field.  Stamping all the CRN numbers in the nameplate was not practical due to space limitations. Canada wide registrations based on one number per vessel solved this problem.