This flowchart is an approximate combination of information collected from the following sources: 1) The Boiler and Pressure Vessel Act, 1999 with 2006, 2010 and 2013 amendments. and Pressure Piping Design as discussed on the TSASK web site. The flow chart indicates which source provides which requirement. Where the requirement is listed in both the Act and the website, the Act reference is provided.

2(b) “boiler” means a vessel in which steam is or may be generated or hot water produced under pressure, and includes any high pressure boiler or low pressure boiler and any pipe, fitting, prime mover, machinery or other equipment attached to the vessel or used in connection with the vessel;

2(g) “expansible fluid” means: (i) any vapour or gas; or (ii) any liquid that will change to a vapour or gas at atmospheric conditions;

From 3(1) – Exemptions: the following are exempt from registration in Saskatchewan:

(d) gas equipment or a gas installation as defined in The Gas Licensing Act;

(e) a boiler that is used in connection with a hot liquid heating system that has no valves or other obstructions to free circulation between the boiler and an expansion tank that is fully vented to the atmosphere;

A pressure piping system is defined through The Boiler and Pressure Vessel Act as pipes, tubes, conduits, gaskets, bolts and other fittings making up a system, the sole purpose of which is the conveyance of an expansible fluid under pressure and the control of the flow of an expansible fluid under pressure between two or more points. The Act and supporting Regulations further define pressure piping regulated within Saskatchewan through the following exemptions:

piping governed by The Gas Licensing Act (such as CSA B149.2 propane storage piping and CSA B149.1 combustion fuel piping);

piping systems forming a part of a low pressure boiler plant and containing hot water at a pressure of 1103 kPa or less or a temperature of 121°C or less; and

piping systems that are not connected to, or used in connection with, a boiler or pressure vessel. 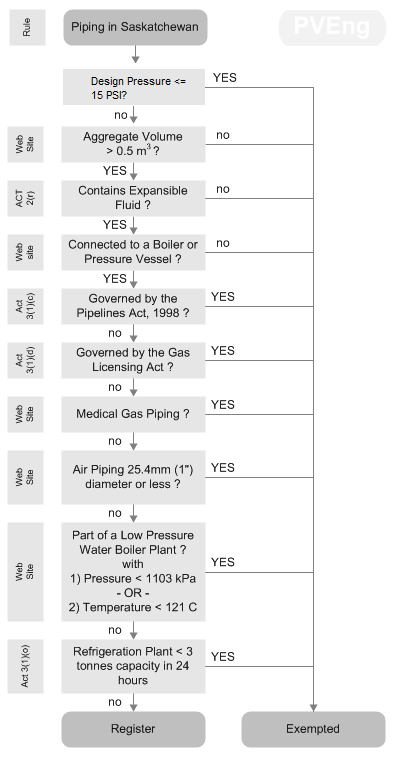