Quebec pressure vessel legislation is currently being amended. The release date is not known. Many changes are being planned including:

Exemption of category A, B and C fittings from registration. Unlike BC and Saskatchewan, category G fittings are not being considered for exemption.

Fittings that have CSA or ULc certification will not require a CRN.

Alternatives to CRN registration of used vessels built to ASME code standards are being developed.

Clarify with RBQ to determine if your skid or piping system needs registration. The flow chart below produces more conservative assessments then RBQ currently provides. In particular, some piping skid systems will be considered not “pressure equipment installs”.

Although this legislation is preliminary, it is currently being applied in a case by case basis. Contact RBQ for your project.

Piping registration requirements for Quebec ONLY: Registration of piping is done at the time the installer submits to the “Regie du batiment du Quebec” a declaration of installation of the piping. If the declaration of installation is accepted by the “Regie du batiment du Quebec”, a number is given to the installer and that number shall be used by the manufacturer of the piping as the provincial piping design registration number. [From Information Relating to Fees Applicable to Boilers and Pressure Vessels in the Province of Quebec * (A-20.01, r. 1.1), April 1, 2003, not available online]

Fittings used in piping systems shall be registered by the fitting manufacturer [fittings need a CRN]. 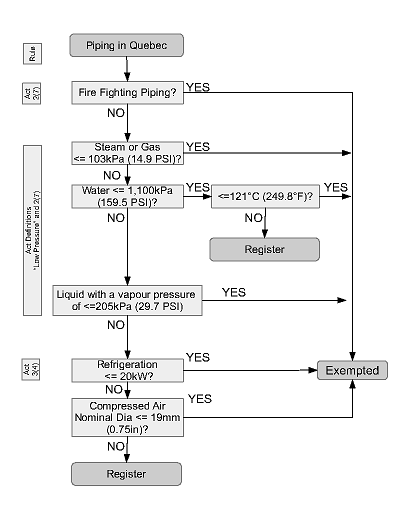 This flowchart is based on information from the following 2 sources:

DEFINITIONS 1. In this Regulation, unless otherwise indicated by the context,

“piping” means a system of pipes and conduits, including a manifold, used exclusively to carry a fluid from one point to another; (tuyauterie)

DIVISION 2 SCOPE 2. The following pressure vessels are excluded from the Act and its regulations:

Refrigeration is covered by section 3 and 3(4) of the act:

(3) Sections 14, 16 and 18 of the Act do not apply to the installation of the following vessels nor to an addition to or modification of their piping:

(3)(4) the components of a refrigeration plant whose total compressor motor power is 20 kW or less.

Confusion arises in referencing sections 14, 16 and 18. Per our conversations with RBQ, sections 14,16 and 18 of the outdated ACT are still referred to by the REGULATION. these sections must be taken from the 2000 ACT, not the current REGULATION:

(14) The installer of a pressure vessel must have its installation approved.

(16) No user of a pressure vessel may put it into operation unless its installation has been approved.

(18) A certificate of approval of installation shall be issued to the user of a pressure vessel when the requirements of sections 14 and, as the case may be, 17 have been complied with.

(17)The installer, repairer or user of a pressure vessel must obtain approval of a quality control program for it, in the cases determined by regulation.

Per these passages from the older REGULATION, Refrigeration plants less than 20kW are exempt in Quebec.