In the book “The new Science of Strong Materials or Why You Don’t Fall Through the Floor” by J. E. Gordon, 1968, Penguin Books, there is a section quoted below (Page 60) dealing with tubular shapes like railway bridges and ships.

A ship is a long tube closed at both ends which happens to be afloat but is not otherwise structurally very different from Stephenson’s Menai bridge. [topic of the authors previous paragraph] The support which the water gives to the hull does not necessarily coincide with the weights of engines, cargo and fuel which are put into the ship and so there is a tendency for the hull to bend. It ought to be impossible to break a ship, floating alongside a quay, by careless and uneven loading of the holds and tanks, but this has happened often enough and will probably happen again. In dry-dock ships are supported with care upon keel-blocks arranged to give even support but there is not much even support at sea where a ship may be picked up by rude waves at each end, leaving her heavy middle unsustained, or else exposing a naked forefoot and propeller at the same moment. As ships tended to get longer and more lightly built, the Admiralty decided to make some practical experiments on the strength of ships. In 1903 a destroyer, H.M.S. Wolf, was specially prepared for the purpose. The ship was put into dry-dock and the water was pumped out while she was supported, in succession, amidships and at the ends. The stresses in various parts of the hull were measured with strain-gauges, which are sensitive means of measuring changes of length, and therefore of strain, in a material. The ship was then taken to sea to look for bad weather. It does not require very much imagination to visualize the observers, struggling with seasickness and with the old-fashioned temperamental strain-gauges, wedged into Plutonic compartments in the bottom of the ship, which was put through a sea which was described in the official report as ‘rough and especially steep with much force and vigor’. Her captain seems to have given the Wolf as bad a time as he could manage but, whatever they did, no stress greater than about 12,000 p.s.i. or 80 MN/m2 could be found in the ship’s hull.

As the tensile strength of the’ steel used in ships was about 60,000 p.s.i. or 400 MN/m2, and no stress anywhere near this figure could be measured, either at sea or during the bending trials in dry-dock, not only the Admiralty Constructors but Naval Architects in general concluded that the methods of calculating the strength of ships by simple beam theory, which had become standardized, were satisfactory and ensured an ample margin of safety. Sometimes nobody is quite as blind as the expert. Ships continued to break from time to time. A 300-foot (90 meters) ore-carrying steamer, for instance, broke in two and sank in a storm on one of the Great Lakes of America. The maximum calculated stress under the probable conditions was not more than a third of the breaking stress of the ship’s material. Even when major disasters did not actually happen, cracks appeared around hatchways and other openings in the hull and decks.* These openings are of course the key to the problem. Stephenson’s tubular bridge was eminently satisfactory because it is a continuous shell with no holes in it except the rivet holes. Ships have hatchways and all sorts of other openings. Naval Architects are not especially stupid and they made due allowance for the material which was cut away at the openings, increasing the calculated stresses around the holes pro rata. Professor Inglis, in a famous paper in 1913, showed however that ‘pro rata’ was not good enough and he introduced the concept of ‘stress-concentration’ which, as we shall see (Chapter 4), is of vital importance both in calculating the strength of structures and in understanding materials.

What Inglis was saying was that if we remove, say, a third of the cross-section of a member by cutting a hole in it then the stress at the edge of the hole is not 3/2 (or 1.5) of the average but it may, locally, be many times as high. The amount by which the stress is raised above the average by the hole – the stress-concentration factor – depends both upon the shape of the hole and upon the material, being worst for sharp re-entrants and for brittle materials. This conclusion, which Inglis arrived at by mathematical analysis, was regarded with the usual lack of respect by that curiously impractical tribe who call themselves ‘practical men’. This was largely because mild steel is, of all materials, perhaps the least susceptible to the effects of stress concentrations though it is by no means impervious (Plate 3). It is significant that, in the Wolf experiments, none of the strain gauges seems to have been put close to the edge of any important opening in the hull. 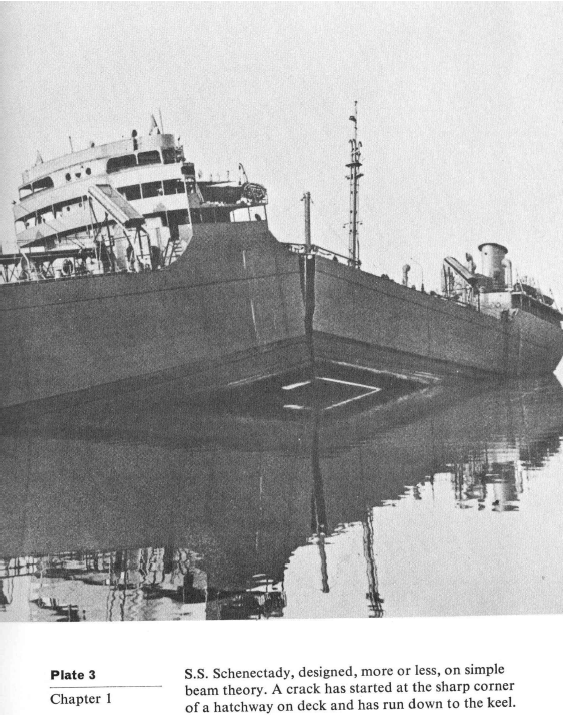 Is this really the origin of the Area replacement (or pro-rata) rules that we use in pressure vessels? Is it just a set of rules that failed when applied to ships but have been successfully applied to pressure vessels? Yes these pro rata rules are still in use in the ASME pressure vessel and piping codes. Basically, when we remove some material from a vessel in the form of a nozzle opening, we look for an equal amount of extra material to replace it, in both the surrounding shell, and in the nozzle pipe.

Picture that the stresses in vessels were too complicated to accurately understand at the time, so a rule like area replacement was adopted from another field like naval architecture. Or it is independently developed by the original pressure vessel designers (our rules UG-36 to 43). The designs work well most of the time but occasionally a pressure vessel blows up (this is after all an experience based code). With more experience, more restrictions like appendix 1-7 are added and our vessels fail less often. Are designers ignoring the intent of the code but purely following the rules – the more specific restrictions on the geometry are added – (like UW-14 to 16). And so it goes – we are still changing the pressure vessel code today. At no point is the problem fully understood but pressure vessels gradually get more reliable. We can expect more changes in the future…

The ASME nozzle area replacement rules cannot be taken on their own. There are a large number of code sections that need to be considered on each nozzle – UG-36 to 43, App 1-7, UW-14 to 16, UG-45 and others. The rules explicitly only apply to circular, obround and elliptical openings – for the last two, the length cannot be more than twice the width. In practice, these limits are commonly violated.

The amount by which the stress is raised above the average by the hole – the stress-concentration factor – depends both upon the shape of the hole and upon the material, being worst for sharp re-entrants and for brittle materials [J.E. Gordon, copied from the above quote].

Brittle materials are not much of an issue with modern pressure vessels, however the shape of opening issues still remains. Also, we do not distinguish between nozzles attached to high stress areas of vessels like knuckles on heads, or lower stress areas like straight shells.