A piping vibration problem is categorized by many maintenance engineers to be among the least liked issues to come across in the field. And there are good reasons why. In some cases, the vibrations are powerful enough to resonate with the fear of an impending fatigue failure. And unlike some of the other maintenance issues, thinking of a quick fix or a permanent solution to the problem without proper guidelines can be challenging.

A dynamic assessment is often requested when the risk scores are high. This assessment includes modelling the system in stress analysis software. A static analysis is performed first to check if the piping is properly supported and complies with the primary and thermal expansion stress requirements of the piping code. A dynamic analysis then follows and is applied to the static stress model to evaluate the piping vibration problem.

It is important to note that the clarity and quality of information delivered to the analyst plays a critical role in helping to bring the piping model and its response in reasonable proximity to the field case. The analyst will request a set of data and documents for this purpose.

The analyst will also be interested in getting responses to a list of queries about the problem. Examples of some of the questions asked are:

The answers to these questions will help the analyst apply the appropriate analytical method to evaluate the vibration issue. Some of these methods include:

Dynamic analysis can be detailed, iterative and time consuming. However, for some cases running a simple modal analysis on the stress model can give valuable information and a possible solution.
A modal analysis helps understand the nature of the piping geometry by providing the natural frequencies of the piping and the associated modes or shapes of the vibrations that can take place.

This should prompt a couple of questions:

This example should explain it better. The model shown in Figure-1 was built in CAESAR II. It shows a 3” Sch 40 pipe branching off a 12” STD thk pipe and blinded off at the end. The 3” NPS pipe sits on rest supports at nodes 120 and 130 and is restrained in the lateral direction at node 130 as well. The sustained and thermal stresses from static analysis are within code acceptable limits for this model. 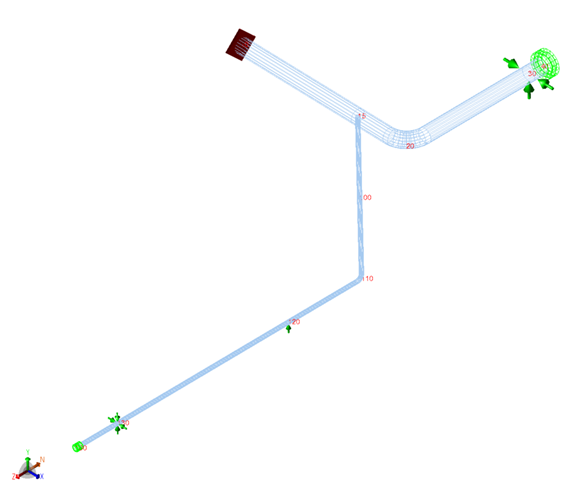 The natural frequencies and the associated modes of vibration are calculated using CAESAR’s modal analysis. The results are shown in Figure-2.

There can be several natural frequencies derived for a piping layout. Deciding on the range of lower frequencies that need to be eliminated is the key. This information is generally provided in the Owner’s specifications or guidelines. Another good reference to get the cut-off frequency value is DNVGL’s Recommended Practice RP-D101 which states in clause 2.2.7.1 that “A typical system supported in accordance with a good pipe support standard should result in a lowest natural frequency not less than 4 to 5 Hz.”

It can be seen in Figure-2 that the natural frequencies of 2.668 Hz and 2.740 Hz are below 4 Hz and therefore can produce a dynamic response or vibration of concern. An animation of these modes of vibration are shown in Figures 3 and 4.

The next step is to remove these detrimental natural frequencies from the system. This is where addition of stiffness to the model typically helps and can be achieved by adding restraints which act like controls on a piping system. The modal analysis is rerun with the addition of restraints (with no gaps) at nodes 100 and 120 (Figure-5). The results show that the minimum natural frequency of the piping system is now 5.367 Hz which is greater than the range specified in DNV- RP-101. As a result of these additional restraints, the ‘likelihood of failure’ of this system due to dynamic causes has been reduced. 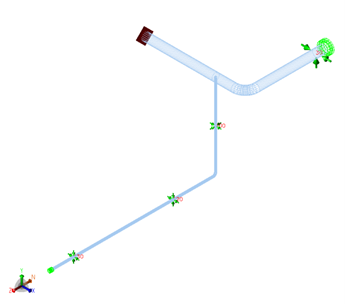 A couple of important steps that should be part of this analysis are: