What is Finite Element Analysis (FEA)? When can it be used? Many of our customers are only vaguely aware of how useful this emerging tool can be in solving their design problems. If you have never heard of it before, you are not alone. This short pictorial shows FEA in use on what at first glance looks like a simple design problem. Mechanical engineers have used Finite Element methods as long as computers have existed. In the last 15 years personal computers have become powerful enough to solve the very complex equations used in the analysis. Along the way the software has become easier to use making FEA a more widely used tool. This sample uses SolidWorks Simulation (SWS) and SolidWorks Flow Simulation to design a cast pipe bend.

This is what the customer wants: a tight radius, thick wall cast pipe bend. The customer has requested the bend to have the same pressure rating as the maximum rating of the pipe it is welded to. Here it is shown with the same wall thickness as the pipe, but the bend wall thickness might need to be adjusted depending on its stresses. How can this casting be made to work? 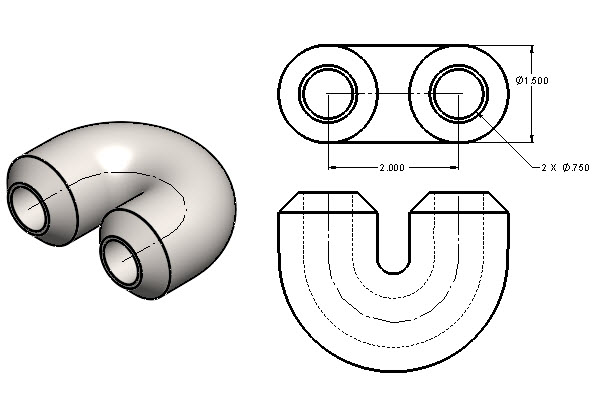 A pipe bend with tight radius and a thick wall.

Pipe bends are widely used in piping design and mandatory code rules provide the required wall thickness and pressure rating, but there are limitations.

ASME code rules covering the required wall thickness of a pipe bend. The location of the intrados and extrados are shown.

When this bend is calculated to the above code rules from ASME B31.3, two errors pop up: 1) the thickness to diameter range is too large (another way of saying the leg spacing is too tight), and 2) the Pressure is too high to use a thin wall equation. Out of interest, the rules do calculate that the intrados (inner radius) should be 2.2x thicker than the extrados (outer radius). (The calculated minimum intrados = 0.768″, calculated extrados = 0.335″ but the rules cannot be used.)

With no mandatory code rules available, FEA or burst testing can be used. Although we might choose to use burst testing to validate the FEA results, burst testing on its own cannot provide the level of knowledge gained from FEA. 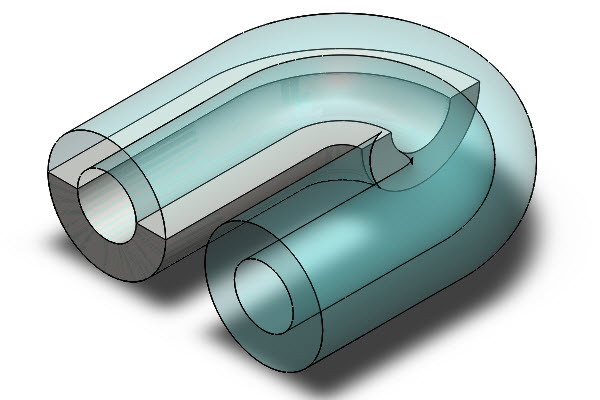 Simplification of the problem through two fold symmetry.

The first step of the FEA analysis is to build a solid model. The bend is symmetrical top to bottom and left to right. The loads are also the same top to bottom and side to side so the stress patterns will repeat.  This allows a valid simplification of only studying 1/4 of the bend.  To start, the bend is made the same thickness as the pipe it is attached to. To improve accuracy of the results, the length of the bend is increased to include some of the attached piping. In this case SolidWorks (SW) is used to model the bend. 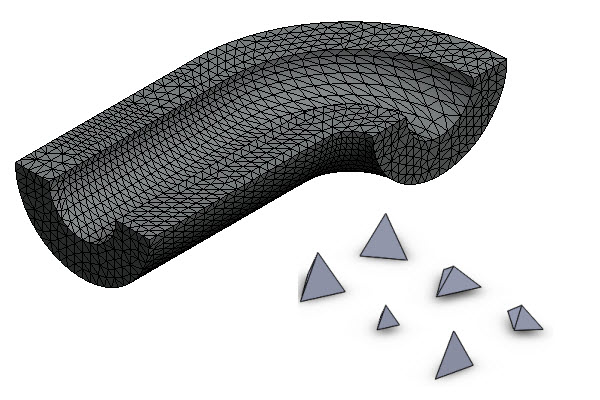 The solid model is imported into SolidWorks Simulation (SWS) where it is meshed into small triangular base pyramids known as elements. In this case 20,500 elements are used to fill the volume of the bend. 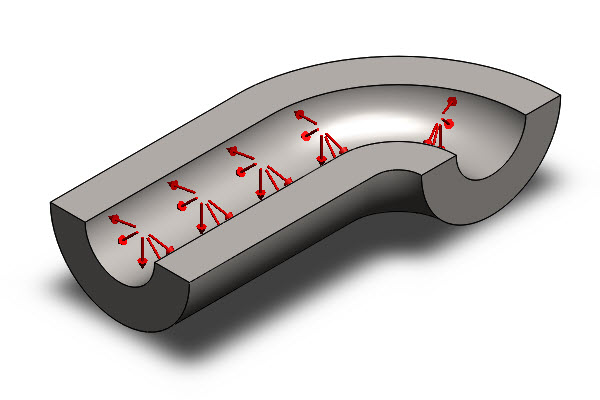 The design pressure of 11,090 psi is applied to the inner surface of the model.

FEA equations for each node of the element.

SWS is not a pressure vessel calculator or a pipe bend calculator. It is a general physics simulator. It does not know anything about pipe bends, but it does know how to analyze the deflection and stress of any pyramid shaped element it is given. It applies the above equations to each node of each element in the model – a total of 82,000 times for this small example. For each node SWS calculates the displacement and then the stress. The trick is that it calculates all the elements in the mesh at the same time and gives the overall results for the whole study, whether it is a pipe bend or any other object that can be modeled. This sample is using 20,500 elements, but many models we run use several million. 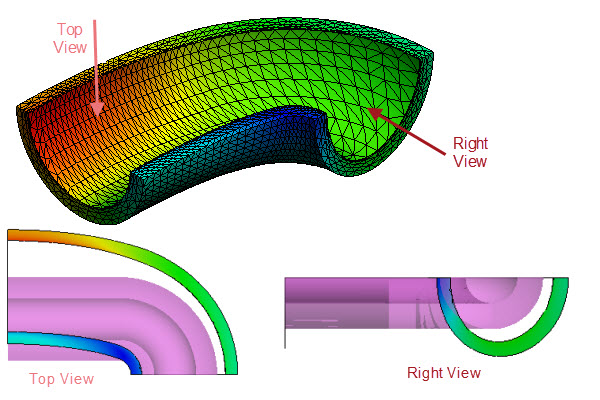 Displacement of the bend under pressure magnified 2000x.

Displacement is calculated first. Here the displaced shape has been magnified 2000x. It can be seen from the top view that under pressure the legs separate. The diameter also grows, but not from the centerline. The displaced shape is complex enough that the analyst cannot easily predict it. From this it is expected that the stress pattern will also be complex. 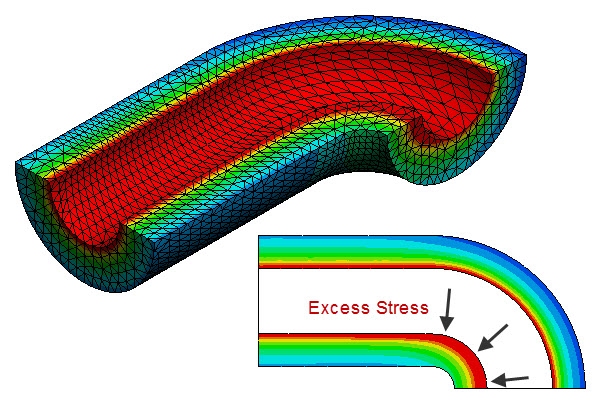 Next the stress. Here is a case where the ASME code rules directly relate to the FEA results. The code rules predicted more material would be required at intrados as shown by the arrows where the stress has failed.

The designer needs to come up with some approaches to solving the problem. Several different ideas can be tried without much difficulty. 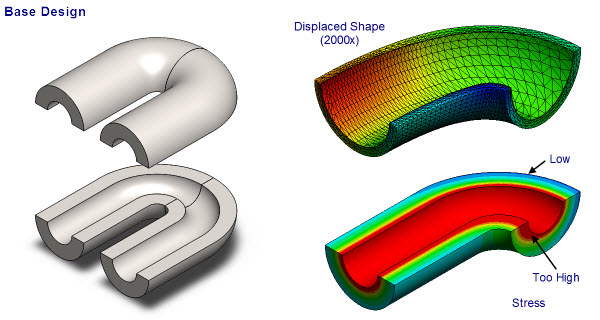 The base design: Fail.

Here is the base design again. The model shape, displacement and stress plots are all on one image. Below are some alternative ideas, some work, some fail. The same displacement multiplier and stress scale is used for all. 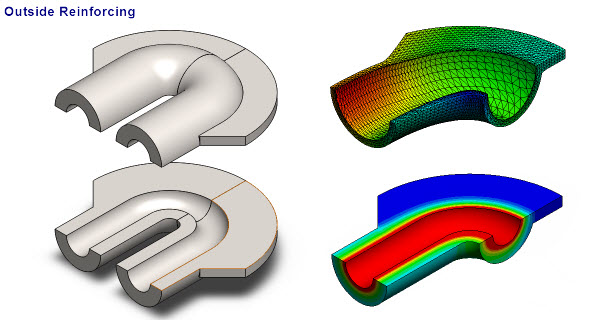 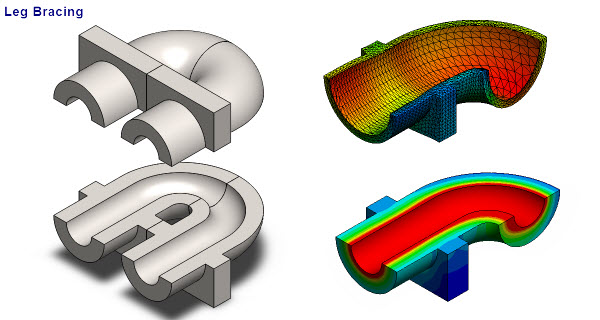 Bracing the legs together – another failure.

The first two ideas attempt to lower the stress in the intrados by reducing the separation of the legs. The outside reinforcing makes the situation worse, the leg bracing does not help. There is still too much stress at the intrados and the extrados is overbuilt. The idea of reducing the stress through controlling the displacement of the legs has failed. The analyst has to try again, but for this model, each run does not take much time and better solutions can be found. 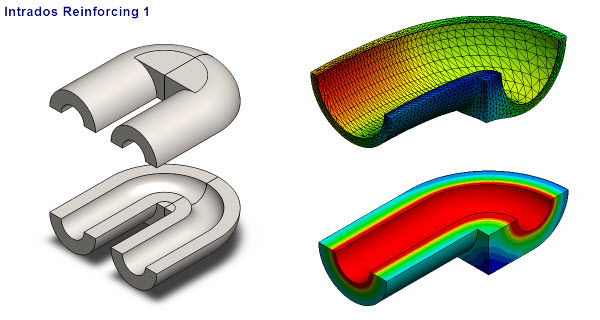 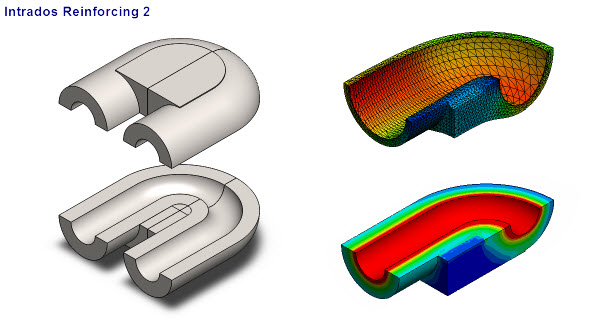 Two attempts to reinforce the Intrados. Almost a pass…

A different approach is to add more material near where the stress is the highest. The approach fails in both cases, but “intrados Reinforcing 2” is close to a solution.  Perhaps there is not enough reinforcing material? 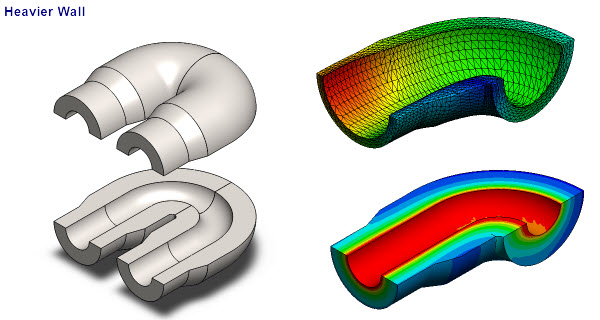 How about a lot more material? At last a pass!

Never underestimate the ability of extra material to solve a pressure vessel design problem. With a quick glance at the results, two things are apparent: 1) the stress in the intrados has been reduced to an acceptable level and 2) there is a lot of material in the extrados and other areas with low stress levels.  The analyst suspects the excess material in low stress areas is not helpful and considers other ideas.  The design is workable, but can we do better? 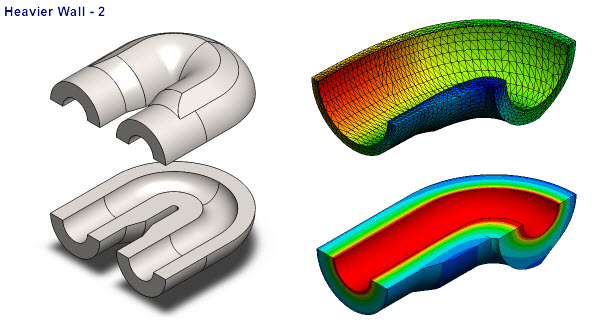 The last attempt had lots of material in low stress areas. Here some low stressed material is removed from the extrados. This design does not take up as much room or weigh as the previous attempt. It is acceptable as far as stresses are concerned.  Will the customer like it?  Do we want to explore more alternatives? 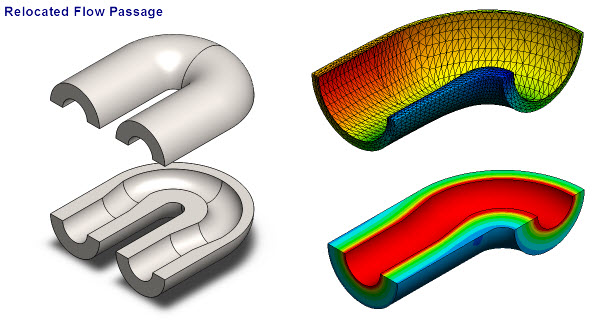 Relocated the flow passage. A pass.

If the analyst has enough time to consider the results and experiment, more solutions start to appear. Here, instead of adding more material to areas on the exterior of the bend, the inside flow passage is relocated towards the extrados. This elegant design passes with the same amount of material as the original failing design, but the material is where it is required.  The analyst likes this approach but does not know if the changes in the interior flow passage will affect its use.  CFD can tell which is better.

The flow characteristics of the two elbows can be compared using Computational Fluid Dynamics (CFD). At PVEng we use SolidWorks Flow Simulation. The design criteria is simple – the better elbow will have a lower pressure drop. These two elbows are compared in depth in our validation set Product Design by Comparative Pressure Drop.  What follows is a summary: 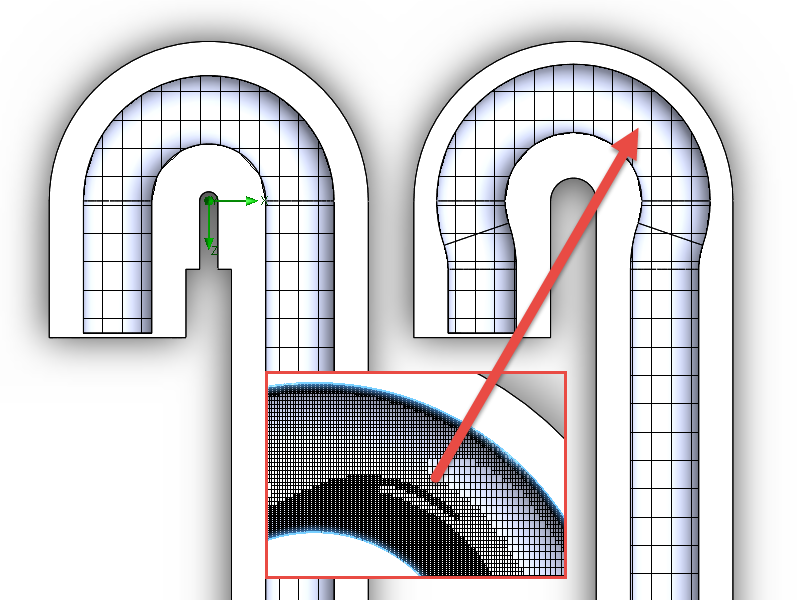 The initial mesh (Mesh 1) for the two passing elbow designs run in the same study: ‘Heavier Wall 2’ on left and ‘Relocated Flow Passage’ on the right. This initial mesh is too coarse to produce usable results, but it is a good starting point for the CFD program which automatically refines it where required.  The inset shows a detail of mesh 6, the final mesh size used. The CFD program has refined the mesh where required. Note that these flow cells are cubes, not the triangular elements used previously for the structural analysis. 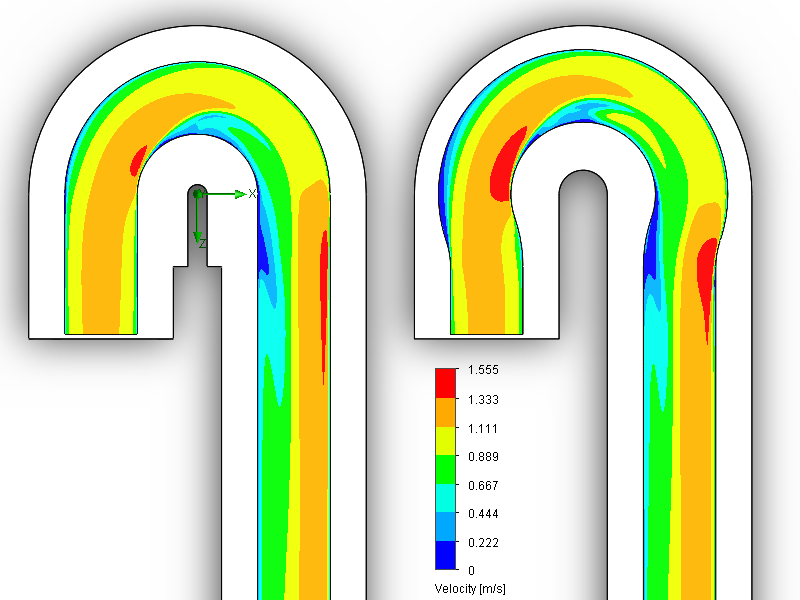 Pressure distribution in the two elbows for mesh 6. The ‘Relocated Flow Passage’ has a more complex flow pattern.

The results are clear: relocating the flow passage is a bad idea.

Once the original model is made and setup it is fairly easy for an experienced analyst to run a series of design iterations looking for practical solutions. New ideas are created and analyzed. Decisions are made on hard pass / fail criteria.  This is the power of FEA and CFD. Here in a short period of time, the analyst went from adding material where it made the situation worse (Outside Reinforcing) to putting it where it was useful (Heavier Wall and Heavier Wall – 2). The idea of relocating the flow passage originally looked good, but it turned out to be a bad idea.  However, it was discovered early in the design cycle.  The designer now knows not to relocate the flow passage, but is it possible to relocate the material on the outside without touching the flow? The designer could easily continue refining the design based on real data.

To repeat a key concept, FEA and CFD are not just pressure vessel design tools. They are general physics simulation methods used in many industries. We suggest reading A Step by Step Introduction to FEA next.

Like any specialized field, FEA for pressure vessels is full of TLAs and other strange words: