This tower sample focuses on the combination of wind, seismic and external pressure loads. The calculations are done in Compress, and the drawing is made in SolidWorks. Download both at the bottom of the page. Tower dimensions and calculations found in the calculation set and on the drawing are discussed throughout this sample. 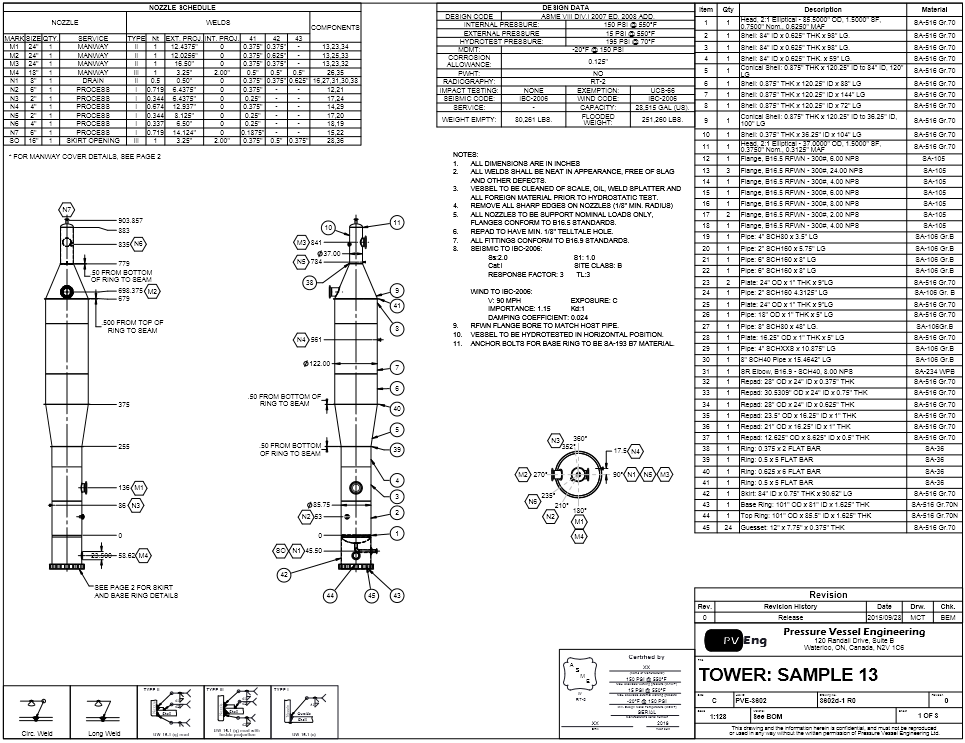 Drawing of the sample tower with combined external pressure, wind and seismic loads

This vessel is calculated using the Compress pressure vessel code program by Codeware Inc. Compress is the most commonly used program for tower design in our office. Its extensive library of available calculation methods makes it useful for many vessel design tasks. The report is longer than other programs, but often is easier to read and includes extensive references, and illustrates most of the calculation steps allowing the methods to be checked.

The drawing is created in SolidWorks. By default, we use SolidWorks to create vessel drawings. Use of solid modeling is like building the vessel once in advance before it hits the shop floor. Solid modeling often takes more time than 2D CAD, but it also shows many design errors or issues in advance. The extra time can easily pay off during construction.

This tower is designed to support IBC wind and seismic loads as programmed into Compress. Response modification factor “R” is the input users get wrong most often. From Earthquake-Resistant Design Concepts, FEMA P-749 / December 2010

R is a response modification factor that accounts for the ability of some seismic-force-resisting systems to respond to earthquake shaking in a ductile manner without loss of load-carrying capacity. R values generally range from 1 for systems that have no ability to provide ductile response to 8 for systems that are capable of highly ductile response. The R factor is used to reduce the required design strength for a structure.

The tower material is assumed to have ductility, but has limited ability to absorb energy by yielding without also collapsing. The goal is not always to prevent damage, but to prevent loss of life. ASCE 7-05 Table 15.4.-2 “Seismic coefficients for nonbuilding structures not similar to buildings” provides the correct value to use for a tower (this table is linked below):

Table 15.4-2: All other steel and reinforced concrete distributed mass cantilever structures not covered herein including stacks, chimneys, silos, and skirt-supported vertical vessels that are not similar to buildings. R=3

Or, with the unnecessary words removed:

Other factors required to do the seismic calculations are included in the table below. Typically, all except the R factor are provided by the end user.

From these inputs the base shear can be calculated. See pages 135 and following for the actual calculations. Some points of interest: 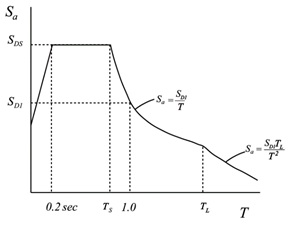 Previously, each section was calculated for internal and external pressure on its own. Now wind and seismic loading is added. The VIII-1 code rules do not cover the combined load. There are many ways available, and Compress uses the methods of Bergman, ASME 54-A-104, 1954 An interesting off topic note from the paper:

The codes furnish the designer with a list of approved materials and the maximum stress values in tension permitted over their usable range of temperatures. The design rules in the codes are limited to vessels of cylindrical or spherical shape under internal or external pressure, and to heads and nozzle attachments for such vessels. Rules for more complicated types of construction and for loadings other than that due to pressure are beyond the scope of the code. To include such rules would turn the code into a design handbook. And it would restrict the designer in working out his design in accordance with acceptable engineering principles. The code requires that he “shall provide details of construction that will be as safe as those provided by the rules of the code.”

Today as in 1954, the code book contains explicit rules covering the design of basic vessel components, and also today, there are no rules for combining loads. Many more mandatory sections exist than in the past. When designs do not fall within the scope of code rules, reviewers can insist on design changes to make code rules applicable, and thus mandatory. This is a particular concern in Canada when designs need to be approved by multiple reviewers for different provincial jurisdictions. To be innovative, vessels need to be designed under the more flexible VIII-2 code, when the jurisdictions allow. The method of Bergman combines the seismic load with the external pressure to create a new, increased equivalent external pressure for the wind and seismic conditions. (Look for “External Pressure + Weight + Seismic Loading Check Bergman, ASME paper 54-A-104” in the calculation sets). The method calculates a new effective external pressure for the vessel section. Because the combined load is an occasional load, the combined limit is higher and the calculated thickness at external pressure might be higher than the combined load required. This chart shows the new effective pressures and from that, the combined load required thickness:

Without any lines of support, the external pressure and combined load calculations would be based on the entire pressurized length of the vessel. The longer the section, the thicker the material needs to be for these loads. The required thickness for this tower would be much larger. The lines of support on this tower are made up of rings rolled the hard way welded to the shells close to the cone to shell junctions. The supports isolate each cone and shell section – they can be calculated individually. The junction’s ability to act as a line of support is judged on the combined moment of inertia of the connecting shells and any reinforcing present. [Look for Appendix 1-8 calculations for the cones, this time looking for I’s and I’]:

Every junction passes the requirements for area replacement without additional reinforcement. Rolled rings have been added to every junction to also pass as lines of support. Internal and external pressure calculations are also run on the heads and the nozzles, but they are beyond the scope of this article.

We work to many ASME standards to design and validate pressure vessels, boiler, fittings and piping systems. We have experience designing thousands of vessels and fittings to multiple codes.

We use Compress, PV Elite, Design Calcs, Nozzle Pro and our own in-house software.

Pressure Vessel Engineering has over twenty years of successful experience in the pressure vessel field working for more than a thousand customers.